In September Helena gave two successful concerts at the National Opera in Prague. Everybody who attended the shows for sure still remembers the tunes of the beautiful “Somewhere”, nostalgic “Memories” or the Czech classic “Lasko, ma ja stunu”. Helena performed several musical pieces which she recreated vocally in her own way doing them even shinier for enthusiastic audience.

Both evenings were created in the atmosphere of world musicals. There were dancers on stage, broad range of colours and lights as well as special guests featuring Bara Basikova and male artists as Jiri Korn and his group 4TET, Miro Dvorsky, Petr Kolar, Marian Vojtko and Vlatimir Boldt. A great contribution to the wonderful musical evenings was done by the Bon Art Pops Orchestra directed by Frantisek Ders.

But the several-minutes-standing-ovations were for the first musical lady in Czech Republic – Helena Vondrackova.

In October and November Helena performed in a Czech musical written by Zdenek Bartak and Petr Markov. She debuted as Evelina in the Hybernia Theatre in Prague on October 15th, 2010. Next performances are planned for spring 2011. 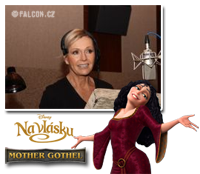 The last autumn project this year is a new film from the Walt Disney Pictures with Czech dubbing by Vojta Kotek, Ivana Korolova and Helena Vondrackova.

Helena accepted the offer to dub one of the main characters in „Tangled” (in Czech “Na vlasku”) with a great pleasure. She makes the voice of Gothel which is Helena’s second dubbing role after Thumbelina in 1994.

As “Tangled” is a musical movie Gothel will not only talk with Helena’s voice but she will sing as well.

The result can be seen and particularly heard in Czech cinemas from January 27th, 2011.

The world premiere of the film took place on November 24th, 2010 and it became directly one of the most seen movies of 2010.